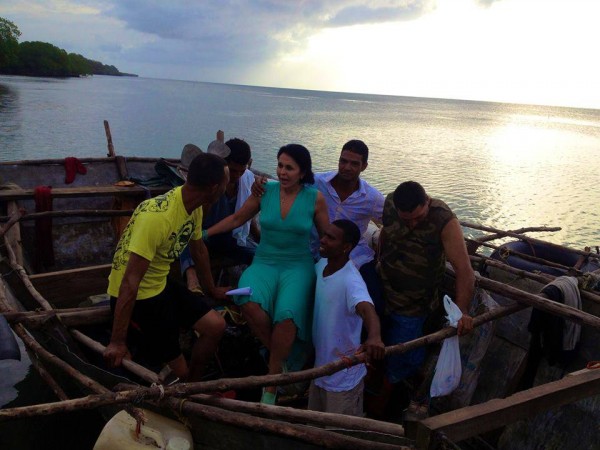 The elected dictator of Ecuador, Rafael Correa, is using Julian Assange as a political pawn. Correa is of course a close ally of Chávez, Castro, and Ahmadinejad. In fact, Ecuador, Venezuela, Cuba, and Iran are more than political allies; they are de facto military allies. Argentina under Kirchner is also a member, by virtue of being bought by Chávez’s Venezuela. She serves the role now of fishing for war with the UK, a proxy for the US in the view of this axis. This is the team that Julian Assange has chosen to honor by applying for political asylum, to avoid questioning over rape accusations.

Now that OAS appears ready to discuss the issue, I think it is only fair to point out one thing that the international press seems to have overlooked: Sweden has a ban on ministerial rule. This means that no minister in Sweden can express an opinion about the case, much less control what the administration does in it. The politicians are completely separate from the administration. Let me make myself clear: Not only is the minister of justice forbidden from telling the justices or prosecutor what to do; every minister is expressly forbidden from even saying what he thinks a public servant should do. Therefore it is impossible for the Swedish government to issue any kind of guarantee. The law runs its own course in Sweden (which is why it is considered the leading country in the world when it comes to rule of law).

Also, the prosecutor cannot spend extra resources on going oversees to interview a suspect, and the government cannot provide extra money to make such a unique trip possible. All laws have to be of a general nature, and all decisions of the government have to be of a general nature. Exceptions like the one Assange and his lawyer asks for are simply not legally possible in Sweden. The fact that it cannot enter into the thick heads of guys like Correa and Chávez just goes to show how corrupt they are in their mindsets.

A message has arrived in Spanish, that alleges to be written by a medical doctor who was attending president Ragael Correa in Quito, Ecuador, in the Police Hospital on 30 September. This is the original text:

In short, the doctor says that Correa was there to receive treatment, that he was never held against his will, and that they were just preparing to dismiss him with honors – even singing the national anthem – when he himself had the military attack the hospital in order to make him seem a victim and to gain sympathy. A hospital with women, children, sick people (!), was attacked with live ammo, just for political effect, by the country’s commander in chief, according to this report.

Media: WSJ has a more detailed story by Mary O’Grady, supported by a handful of witnesses (in Spanish).

Update: Even several days after this came out, Liberal Swedish newspaper DN still carries the official version from the ALBA-nation, affiliated with the narcoterrorist-sympathizer Hugo Chavez.

Update 2010-10-01: The president was brought out from the Police Hospital by the military last night, after a firefight with the police that we could see on live TV here in Miami. There was never a declaration of a coup, and the whole things seems to have been nothing but a protest that went out of hand when someone fired a tear gas grenade in the face of the president. In that respect this event was of a completely different nature than last year’s events in Honduras.

In Honduras, the protests started with peaceful mass demonstrations, in which unarmed civilians dressed in white demanded that the president respect the constitution and the rule of law. At the same time, a judicial process was being carried out against the president in the courts. The first loss of life was many days after the president had been deposed, and then as a result of a deliberate stratagem to create a martyr, staged by the deposed president and his supporters.

In Ecuador the kettle immediately boiled over as a result of seemingly spontaneous protests by the police, and, weapons being fired, it caused the loss of lives on both sides the first day. Yet the situation is similar in many respects in the two countries. Both were members of ALBA, and both presidents were taking bribes from a foreign country, Venezuela (the so-called ALBA “loans”), thus potentially committing treason but at the very least a severe case of corruption.

Another similarity is that both presidents were pursuing policies that threatened the very existence of the popularly elected Congress, the ultimate voice of the people between elections: Zelaya by holding a referendum that would have opened the door for him to abolish the constitution, and Correa by threatening to abolish the Congress and rule by dictates. Anybody concerned with the rule of law and democratic institutions thus had reason to distrust the president in both countries.

Honduras painstakingly pursued a legal process to stop their president, peaceful protests coupled with a judicial process. It is the civilized way to do things.

Coup d’etats can never be justified, and that goes for autogolpes, too. If Correa insists in his plans he will be guilty of an autogolpe, but that in and of itself does not justify the police starting to riot in the streets. The deposing of a self-coupster has to be initiated in the proper democratic institutions, as was the case in Honduras. The rule of law cannot be defended by violating the rule of law.

Original text 2010-09-30: Yesterday I blogged about how Honduras could have started a new centrist trend in Latin America when the democratic institutions, led by the popularly elected Congress – got rid of an increasingly despotic president.

Today the fury of the masses was directed at Ecuador’s president Rafael Correa, who also is showing increasingly despotic traits. The president was taken to a hospital, allegedly injured by tear gas as police was protesting.

The word is that there is a strong sentiment among ordinary people that he has to go, but as I write this nobody has declared that he has been replaced. Perhaps it will, this time, stay at a strong warning sign for Correa, and not develop into a coup. Or maybe not.

At any rate, here is a reminder to him that no president is above the law:

A friend was flying out today but the flight was cancelled when it was about to take off, as the military blocked the runway. Stay tuned.