Update 2010-06-28: Today is the anniversary of the deposing of Zelaya. La Gringa in La Ceiba, Honduras, has written a very good blog article summing up the situation. She is unfortunately correct in that the hope and optimism under Micheletti has largely vanished under Lobo. It started when he went to Dominican Republic and signed a deal to let Zelaya leave Honduras, before he even took office. At that point Micheletti withdrew from the limelight, and the people raged against Lobo without the previous president to channel their feelings. That is, however, how democracy works; alternation at power. What those who liked Micheletti can do is to channel their frustration and their desire for change into creating a better political platform, and candidates that support that platform, for the next election. Create a platform that is grassroots-based, that is about realpolitik, concrete actions, not ideals. 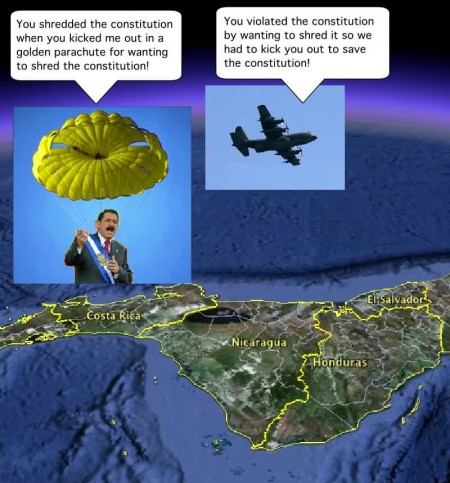 Original post 2010-06-23: On June 24, 2009, the head of the joint chiefs of staff in Honduras, general Romeo Vasquez Velasquez, told his president, Manuel Zelaya Rosales, that the military was unable to carry out the order they had been given to distribute ballots for a referendum on June 28, since the Supreme Court of Justice had issued an injunction against anyone in Honduras participating in that endeavor.

With that statement, Zelaya’s coup d’état came off its tracks. Without the support of the military he could not win. If the military took orders from the Supreme Court, he would not be able to throw out the constitution of the republic as he had planned.

“Mel” Zelaya’s response was to fire general Vasquez, but immediately he did so, the other chiefs of staff handed him their resignations, starting with the head of the army, general Miguel Garcia Padgett. This is public knowledge, but what happened behind closed doors is not.

In the face of this setback, Zelaya understood that he was, to put it bluntly, screwed. He decided to throw in the towel and resign, according to my sources. However, there were powerful business interests who had vested economical interests in him continuing in power. What exactly those interests are I do not know, but given the extensive misappropriation of public funds that has been revealed after his departure from office (he didn’t even have a budget the last year!), one may guess that there were those who wanted certain things to stay hidden. Others might have lucrative oil contracts related to the deal with ALBA (Chavez’s band of countries, who get to buy oil on loan on favorable terms) – they must have understood that if Zelaya left office, the oil would stop flowing, and thus the loans that allegedly didn’t have to be paid back. You all know what that is called in plain English.

The reason Zelaya did not hand in the resignation letter on June 25 was allegedly that he was persuaded not to. He was persuaded to stay and fight, to take a mob to the military to retrieve the ballots, and to completely run roughshod over all the democratic institutions. Whoever persuaded him managed to convince him that if he was only bold enough, the tepid public servants would not dare to stop him.

The key persons were anything but tepid. They may have appeared tepid, but when faced with real and imminent danger to the democratic form of government, they stepped up to the challenge and acted like veritable heroes.

Honduras thus managed to preserve its constitution. As we all know, the actual act of removing Zelaya from office was, unfortunately, erroneously interpreted by the whole world as a military coup. An enormous pressure was put on the constitutional interim president, Roberto Micheletti Bain, to effectively abandon Honduras’s sovereignty.

Micheletti turned out to be the right person at the right place at the right time. He fiercely defended Honduras’s independence and sovereignty, and made Honduras into a symbol of pride in Latin America. This image, which I first saw on a site in Venezuela, illustrates that beautifully: 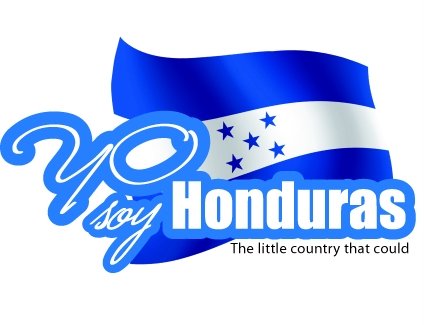