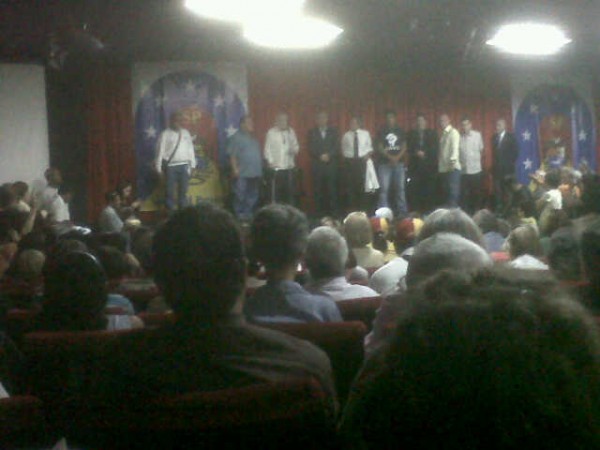 On January 10, the previous presidential period ended, and the new started. However, no president was sworn in. The previous president, Hugo Chávez, who is also the president-elect, went to Cuba for surgery on December 10, and has not been heard from since. The Cuban regime claims that he is alive but in such a condition as to be unable to communicate or receive visitors (not even family; most of them are not even given entry permits to the country). However, the former vice president, Nicolas Maduro, claims to be getting instructions from him. Although the time period expired and the Constitution calls for a new president to be sworn in on January 10, that was not done. The Supreme Court issued a ridiculous verdict in which the key argument was based not on an existing paragraph, but on the fact that two paragraphs from the previous constitution no longer exist in the present one. Using this flawed argument, the error of the excluded third, they ruled that the previous president can continue in office for an undetermined time until he can be sworn in again as the new president. The truth is probably that he is dead, though.

Since Venezuela no longer has a head of State, it has in effect ceased to exist as a sovereign nation. Furthermore, since the orders come from Cuba, and there is no way of verifying if they come from a still living Hugo Chávez, or from the Cuban regime, one has to conclude that Venezuela now is ruled from Cuba. Public statements by a Cuban military in Venezuela on Jan 10 confirms this; he said basically that if you try to rebel we will beat you down. The opposition presidential candidate in the Oct 7 sham elections, Capriles, made an incoherent statement which could be interpreted any way you want, in his usual style.

Students have gone out in hunger strikes all over the country. Other forms of protests have been beaten down, the country being totally militarized. A Facebook page called Operacion Libertad Venezuela reported that their activists had only managed to make one graffiti in the first night, and even that was interrupted by military although it was in a remote mountain village(!). The opposition are talking about doing the traditional march on January 23rd, in celebration of the fall of the last dictator in 1958 as a result of popular protests. The regime always arranges a counter-march, ordering state employees out, paying the poor to come, and bussing in tens of thousand from other parts of the country.

It should be noted that there is a significant part of the population that fervently believe that Chávez is still alive, and that he will come back. Their behavior and belief system is consistent with that of members of a religious sect. Personally I have come to the conclusion that chavismo must be regarded as a sect, a communist religious fundamentalist sect. Their behavior is totally illogical for non-members, and they are not receptive to arguments based on facts. This brings in another factor into the equation, so that there are two things that differ from the Arap Spring uprisings: The foreign occupation, and the sect nature of the followers. Given that these fanatical followers have been heavily armed by the regime with automatic assault weapons and motorcycles for mobility, there is a real and present danger for a violent confrontation. However, the hard core may not be that big, and they don’t stand a chance in an open battle with a trained military. Therefore the glimmer of hope that exists for Venezuela is that the military will obey their oath to defend the Fatherland, and the Constitution is on their side.

The president in Venezuela is the commander in chief, and that task cannot be delegated. Thus, orders that come from anybody else than the president are invalid, and they have no obligation to follow it. Since Venezuela today does not have a Constitutional president (the Supreme Court ruling being unconstitutional and invalid; it should be mentioned that all 8 justices who are in charge of rulings of constitutionality recently were replaced), the military does not have a commander in chief. They must therefore adhere to Article 333 in the Constitution, which says that it is every citizens duty to restore the constitutional order if it is violated. This means that the military has a duty to act against the Cuban invader. Of course, the leadership of the military is part of the treason, but the vast majority of the armed forces resent the acts of the (narco) leadership.

There is a saying in Venezuela, “hay que ponerse las alpargatas ya que lo que viene es joropo.” That is what is being done now, preparing for a major battle.