October 7, 2012, a presidential election will be held in Venezuela. Or will it? There is a lot that suggests that the process will be interrupted by a military coup. Hugo Chávez is dying in cancer (although he has claims to be recovering), and the politicians are preparing for what happens next.

The opposition in October is Henrique Capriles Radonski, from the unity group, MUD. A poll released the other day reports that Chávez will win by 53%, 19% more than Capriles Radonski. The regime portrays the opposition as desperate, and accuses the “USA-supported right” of planning to carry out a military coup d’état.

To prevent such a coup, an anti-coup command has now been created. It is under the command of the “chairman of PSUV”, which is kind of an interesting way to put it, since PSUV is a political party and not a branch of government. The chairman is Hugo Chávez, but since the anti-coup command is not expected to be called upon until after he dies, the person of interest is the vice chairman, Diosdado Cabello. He would be the one commanding the “anti-coup” forces of the party.

The foreign powers with most interest in Venezuela are Cuba, Iran, Russia, and China. Cuba cannot afford to lose the economic support from Venezuela, and has infiltrated all branches of government, including all parts of the military. They effectively control Venezuela. Iran to a lesser extent also depends on Venezuela for getting around the sanctions, while Russia and China mostly are interested in that the next regime honors the agreements (which are very favorable to those countries; basically Chávez sold Venezuelan resources on the cheap, in return for personal power).

Following the Cuban model, Chávez had already created militias heavily armed with automatic weapons. Their purpose is to “defend the revolution”, and one may presume that their one and only purpose is to render military coups impossible.

As for the poll cited earlier, Henrique Capriles feels confident that he will win, and says that he is “laughing” at the poll result. A campaign coordinator whom I interviewed said that “among the poor, Chávez is already losing”. Knowing that in Venezuela the justice sits in the sharp tip of the spear, the pollster was most likely given an offer he couldn’t refuse for publishing that result. It wouldn’t surprise me if all the figures are accurate, but that they have search-and-replaced Chávez with Capriles in the report, and vice versa. Doing it that way makes it much more difficult to discover the fraud, than if the figures had just been invented.

Planning for a Coup

There are only two handbooks available for how to plan and execute a military coup (“Coup d’État – a practical handbook” and “How to stage a military coup – from planning to execution”). I have read them both, with Venezuela in mind. Let me tell you, the conditions just aren’t there for staging a military coup in Venezuela in 2012. There are several reasons, the most important being that Cuba is effectively ruling Venezuela, meaning that the coup would have to be staged in Havana, Cuba, to be successful. Another deterrent are the militias, which undoubtedly would lead to a species of civil war if a coup was to be carried out.

So why did Diosdado Cabello create the anti-coup command?

To get an idea we have to look closer at the power structure of the regime. Diosdado Cabello is also the speaker of the parliament, and as a former military he was involved in Chávez’s 1992 military coup attempt. He has a lot of actual power, and can count on support by significant parts of the military. He has been rather credibly accused of being deeply involved in the drug-smuggling business, conducted by a number of leading militaries, including the minister of defense Rangel Silva (google Eliado Aponte Aponte and watch the interview, in Spanish of course).

The PSUV aristocracy has been said to also contain ideologues, who are more into socialism than cocaine. The leaders among those are allegedly the foreign minister Nicolás Maduro, and vice president Elias Jaua. Neither of these can count on support from the military, especially not Jaua, according to pundits.

The common wisdom is that the civilian/socialist, and military/narco branches of PSUV will fight for power once Chávez dies. The anti-coup command should probably be seen in this context, the internal power struggle. But how would Cabello benefit from it? Allow me to outline a possible scenario. 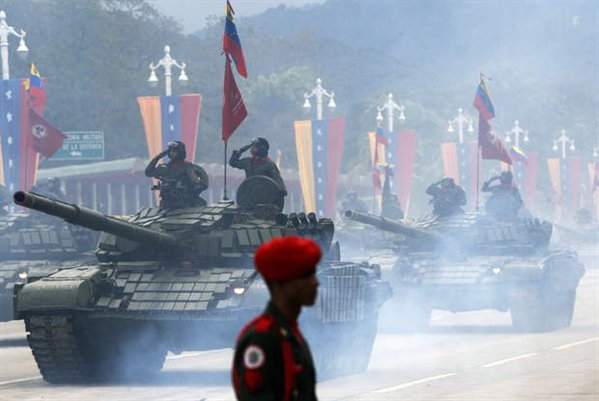 Some time after midnight small groups of soldiers, who are part of the conspiracy, receive their “go ahead” order. Traveling in civilian cars they drive to their designated targets: Nicolas Maduro, Elías Jaua, and other key figures in the government and PSUV. One group is deployed to the residence of Diosdado Cabello, but he is not at home. They kidnap (“arrest” in their vocabulary) their targets and whisk them off to a secret location, where they are being held incommunicado for the duration of the active phase of the coup.

At about the same time, saboteurs set out to take out all of the information infrastructure except the main opposition radio and TV stations in the capital. Among the targets is TeleSur, the international satellite TV channel that is controlled by the regime’s minister of information. They don’t destroy it permanently, they just cut some cables to keep it offline a couple of hours.

Other groups deploy in full military gear from Fuerte Tiuna, the military base in the capital, after first locking up all Cubans in their units. They spread out and set up road blocks to prevent enforcements from arriving, and they make sure no runway at the airport can be used. If they can’t take the airport due to heavy defenses, they just park some armored cars on the runway, and deploy some machine guns around to prevent the defenses from reaching the vehicles.

The largest unit moves to the presidential palace, “Miraflores”, with armored vehicles, but are met by a much larger force why they chose not to engage.

At this time the anti-coup command is deployed and moves to undo the damage caused by the saboteurs. Diosdado Cabello goes out on live radio and TV and explains that the “USA-supported right” has attempted to carry out a military coup during the night, but has failed. He declares a state of emergency and curfew, assumes all power since several key persons of the government are missing, cancels the October elections, and arrests all leading opposition persons accusing them of being behind the coup. Finally he explains their desperate act by the fact that they “knew” that they were going to lose the elections in a landslide, as evidenced by the opinion polls.

This is a conceivable scenario. It may well be that something like that will happen. However, it will only appear to happen that way. In reality, the “military coup” will most likely be a false flag operation, staged by Diosdado Cabello himself through trusted intermediaries. To cover his role he will be on the list of persons to arrest, but he will make sure to be in a safe place from which to lead the anti-coup command. This scheme has several nice benefits: He gets rid of the internal competition for power in PSUV, at the same time as he gets rid of the political opposition. He becomes a new Fidel in Latin America. Chess mate.

4 thoughts on “The next military coup in Venezuela?”